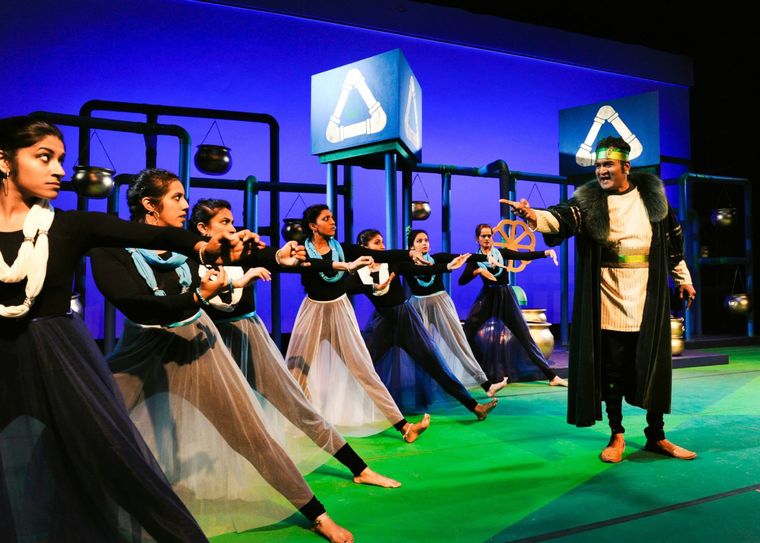 The Naatak theater company, one of the largest Indian American theater companies in the country, recently received a $30,000 grant from the Knight Foundation for the premiere of its 50th production, “Vrindavan.” (Ashima Yadava photo)

SAN LEANDRO, Calif. — Shortly after being named the “Best Live Theater” in Silicon Valley by the San Jose Mercury News, the Naatak theater company was awarded a grant of $30,000 from the Knight Foundation for the premiere of its 50th production, “Vrindavan,” scheduled to run Sept. 12 to 27.
Written and directed by Sujit Saraf, 46, artistic director and Indian American co-founder of Naatak, the Hindi musical is based on a real-life incident in June 2014 when actress-turned-politician Hema Malini suggested that widows from Bengal who had moved to Vrindavan, Uttar Pradesh, should remain in Bengal instead of going to the over-crowded town.

“There was a big uproar about how dare Hema Malini try to send these widows back to Bengal,” Saraf told India-West. “Naturally, I found it both very amusing and a little beside the point, because none of the warring parties actually give a damn about the widows in Vrindavan.”

Saraf explained how for the last 500 years, the widows have been migrating to Vrindavan because usually their families no longer want them in the household once their husbands are dead. The official reason, however, for migrating is their devotion to Krishna, he said.

From that was born a play, which isn’t Saraf’s first. He explained how there is a shortage of good scripts, particularly in Hindi, so he has written six or seven plays that have been staged by the theater company.

The scripts represent the complexity of the Indian experience, with some plays set in India and others set in the U.S.

“Three in four plays are in Hindi, the rest are in English and a few have been in Tamil,” Saraf said.

The volunteer-run theater company has also produced three independent films in the past but has focused exclusively on presenting higher quality plays for the last 10 years.

“Our filmmaking was, I guess, an offshoot of our theater work,” Saraf said. “We were just trying to do something somewhat new.”
Saraf started Naatak 20 years ago when he was attending the University of California, Berkeley with his friend Sanjay Rajagopalan, who was studying at Stanford University, in late 1995.

In addition to plays, the theater company has put on three staged readings, with a fourth just around the corner.

“It’s a really beautiful way of experiencing a play without having to stage it,” Saraf said. “We would like to stage 15 plays a year, but our resources only permit three or four … Obviously, you do not get the same kind of experience that a staging of the play would provide you, but you’ll perhaps get halfway there with much less effort.”

Written by Badar Sarkar and directed by Abhishek Das, Naatak will put on its fourth staged reading, also in Hindi, called “Pagla Ghoda,” Aug. 2 at 4 p.m.

“Pagla Ghoda” follows “four men from different walks of life chatting at the funeral of a young woman” whose death is shrouded in mystery, according to the Naatak Web site. Secrets of their own begin to emerge as the woman haunts them and forces them to confront their pasts.

“We think of ourselves as transforming the culture in the Bay Area from merely going to community events and movies to watching extremely high-quality theater,” Saraf told India-West. “For years we have thought of ourselves as professionals, even though we don’t pay ourselves for what we do, and we hope to continue doing it for the next 20 years.”