This article was published on January 6, 2017 by 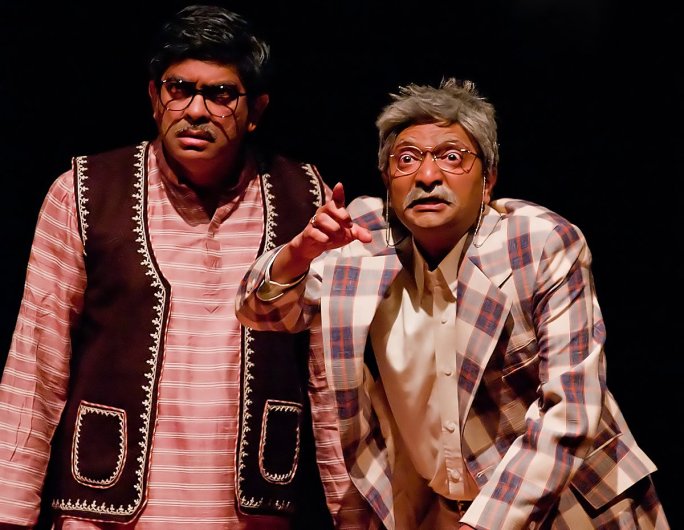 Harish Agastya, right, seen here in 2009 production of ‘Patol Babu Filmstar’, was recently named Cupertino’s Distinguished Artist of the Year. Agastya has been an actor, producer, director, playwright, and board member for Naatak, the Bay Area’s first Indian-American theater company.

Harish Agastya, with Naatak House theater, has been selected by the Cupertino Fine Arts Commission as Distinguished Artist of the Year.

Naatak, which was founded in 1995 in Santa Clara, is the Bay Area’s first Indian American theater company. The company is now on its 56th theater production.

According to Rajiv Nema, marketing director for Naatak, Agastya has been with the theater company “from day No.1 and play No. 1.”

“Harish is primarily an actor and a director,” Nema said in an email. “But, as any theater company and Silicon Valley startups would have it, Harish now wears many hats. He is our operations director, in charge of theater bookings, grants and leading of our rehearsal space. He also is one of three board of directors.”

Agastya said working with the company in so many different roles has been rewarding.

“I like to challenge myself, help out in whatever area I can contribute, and I’ve spent most of my energies at Naatak either directing or being on stage, but I love expanding my horizons,” he said. “I find that it’s an amazing stress-buster, just being involved in theater.”

Agastya said he feels grateful to be selected as Distinguished Artist.

“I am very honored, and I think it means a lot to be recognized by the city for something like this,” he said. “I’m thankful to all of my fellow board members at Naatak. And I think all of us have stepped on the shoulders of the hundreds of Naatak volunteers that have been with us as we’ve put these productions together.”

“When not acting or directing, Harish in a true spirit of a theater person, gets involved in any capacity, ranging from building sets to mopping the floors before a performance,” he said in the letter. “In addition to the talent and passion, what I find equally valuable in an artist is humility and collaborative nature and both are in abundance in Harish. I truly believe that Harish deserves this award and will be a great spokesperson and poster child for the advancement of arts in the Cupertino community.”

For Agastya, his work in theater helps promote the arts in an area where they can often take a back seat.

“When we started Naatak, we noticed that there was a need for the arts to be represented, especially in the South Asian community, but also across the board,” he said. “This is really a community-wide issue. I think it’s fundamentally to address this burning need, a gap that was there, in Silicon Valley especially, I believe there is an arts imbalance.”

According to Agastya, Naatak is the biggest Indian theater company in America, with more than 750 cast and crew who have been with the company over the last 21 years, and a fan base of more than 50,000 audience members to date.

The theater company is a 501(c)(3) nonprofit run entirely by volunteers.

Catarina Kidd, senior planner with the city’s community development department, said the fine arts commission based its award selection on education and training, work experience, art skills, merit and accomplishments, contribution to the community and public standing in the art community.

She added that winners each year receives a $500 cash prize, a plaque presented at the Fall Festival, and a display on the art wall in the Cupertino Library. Winners must live or attend school in Cupertino and be age 31 or older.