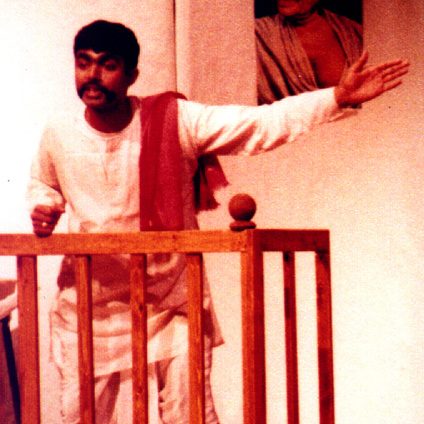 (By Srikar Srinath on Feb 16, 2017 to mark the 21st anniversary of Naatak’s first show ever – It was our first play Khaamosh Adaalat Zaaree Hai. Staged on Feb 16, 1996 in Cubberley Theatre, Palo Alto)

I went to the second Naatak audition at Stanford. Sanjay (Rajagopalan) and (Sujit) Saraf were there and a few others. It was the early days of the ’Net; I came across the audition announcement by accident while browsing Usenet (rec.music.indian.classical I believe – a group that usually had epic flame wars. I think the announcement may have been the single useful thing I got off it). I had done some theatre in college, had broken up with a girlfriend 4-5 months previously, was looking around for some interesting things to do outside work. I had just joined the Santa Clara Cricket Club and quickly realized there was no chance of meeting single women there. The probability didn’t really change with Naatak.

I think I got a role mainly because I could actually read Hindi unlike most people at the audition. It used to be a standing joke between Saraf and me that I actually got a 1 (i.e. greater than or equal to 90%) in ICSE Hindi and he didn’t. The role required me to look professorial and seem smarter than I actually was (Saraf has strangely never confirmed if he thought I didn’t have to act much) so it was an excuse to go to the smoke shop outside Berkeley and buy a pipe. Even tried it out, method acting and all, it was pretty disgusting. I stuck to hookahs.

I had a run-down hatchback too for rides to/from Berkeley and BART. Lots of time was spent in traffic singing Kishore Kumar songs. I had friends up in Berkeley so I’d sometimes go up the night before rehearsals to have a drink with them and then crash on the floor of Saraf’s tiny single room. He didn’t really have any spare bedding and I don’t know when the floor carpeting was last cleaned. I started carrying a sleeping bag.

Sometime in January (1996), we all bonded over donuts in a food court outside Berkeley and I think that’s when it hit me that we might actually pull this off. Still wasn’t sure about whether there would be a next play, but at least this was fun. I got introduced to Bhavika’s (a hole in the wall vegetarian restaurant in Sunnyvale) too who has probably had a role second to my mom in providing nourishment to me.

The Terman building (in Stanford University) doesn’t exist any more, but we rehearsed on the top floor and had to coordinate entrance on the weekends because the doors were locked and we didn’t have cell phones. The room was a classroom and we had to clear a space to rehearse and then lug all the tables and chairs back again after we were done. At least the classroom in Berkeley (Dwinelle Hall) had a stage. At some point we found a ping-pong ball in Terman and started playing hand cricket during breaks. Saraf and Sanjay never joined in.

Don’t remember much about the actual performance. The line outside was reassuring, so the hall was at least full in the mid-section. We got through it without too many flubs. I think the audience laughing at unanticipated points was the one thing that threw us off – like right after the first line. I guess the thought of Indian theatre in Silicon Valley was about as ludicrous seeming to them initially as it was to us. My proud record of never having been directly responsible for a ticket sale started with this production.

I think we felt pretty good about ourselves afterwards and that began the usual tradition of email zipping around saying we should do it again and Saraf tamping down expectations quickly and telling us we should get over ourselves. I remember Mukund (Marathe) gave us a lot of helpful feedback after that play. We borrowed some stuff from Maharashtra Mandal too. The real bonding between all of us happened during the 1996 cricket world cup shortly after where we’d spend late nights watching matches in Fremont or at the homes of people with satellite TV. We were all a bit taken aback at the Saraf party model when we first encountered it – food from Bhavika’s, drinks, and then the command “Chalo, gaao!” followed by the whipping out of the harmonium… We learned to carry printouts from the ITRANS Song Book so we didn’t get ridiculed by Saraf for messing up words.