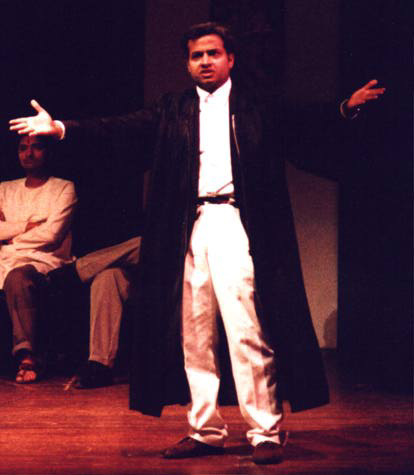 (By Sujit Saraf on Feb 16, 2017 to mark the 21st anniversary of Naatak’s first show ever – It was our first play Khaamosh Adaalat Zaaree Hai. Staged on Feb 16, 1996 in Cubberley Theatre, Palo Alto)

We started rehearsing, and THEN looked for theaters. We quickly found out nothing was available for months. Naatak nearly died before it was born.

President’s Day saved us: no one had booked Cubberley for Feb 16th and the day before it. We took it.
One show. About 80 tickets sold in advance in friends and family. Nice line at the box office, which sold 125 tickets. Ticket total 205.
Tickets $10 (regular) $8 (students)
Expenses $1532
Revenue $1800 (tickets) + $500 from Swagat India Cuisine (because Raghu and Rupa (Harish Belur’s brother and bhabhi) were regular customers there).
Naatak’s first play was profitable 🙂
We gave all that money to ASHA.

I was in white kurta pajama, the only one I had.

Then I cracked a lame joke: about how more time was spent on BART than in rehearsal. 4 cast members plus I were from Berkeley, 4 cast members plus Sanjay (Rajagopalan) were from the peninsula. Half the rehearsals happened in Berkeley in my department, while the other half happened in Terman Engineering building in Stanford (Sanjay’s department). Most of us were students and did not have cars. I think Harish (Agastya) was already working, so had a car. Sanjay was a richly-paid grad student, so had a car. The rest of us spent our time on BART, getting picked up at BART stations by these car guys. (Berkeley->Union City, then by car to Stanford).

That was the first line spoken in Naatak 😉