Dealing with Grief Over a Son’s Loss 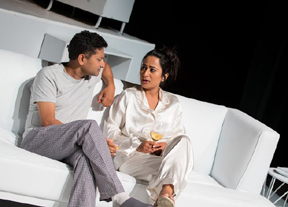 We have all been touched by tragedy in some way, directly or indirectly, in our lives…a death in the family is the worst kind….when that death involves an innocent child, it is even worse, and when that child is your own four year old, accidentally run over by a car as he chased his dog down the road…….words can’t even begin to describe the unbearable feelings.

Nothing is, or seems it can ever be, right in Deepu and Avinash’s world as they grapple with this meaningless loss in their suburban home, a few months later, in this well executed performance of “Rabbit Hole”, Naatak’s 49th production, at Cubberley Theater in Palo Alto. Redefining the future while reliving the past is a relentless and merciless endeavor for the present.

Written by David Lindsay-Abaire, and receiver of the 2007 Pulitzer Prize, this novel was made into a critically acclaimed movie starring Nicole Kidman as the lead. The play stays true to the original story with no embellishments, and is a candid portrayal of the gamut of emotions the mother, father, aunt, grandmother, and the teen driver responsible for the tragedy go through with the passage of time.

Thoughts, memories, emotions are expressed at unexpected times in unexpected ways, and set off by vivid connections to the child lost forever, leaving behind a void that is impossible to fill, or even acknowledge.

A rabbit hole is an allegorical expression for a confused and upside down situation one encounters, after entering one, a la Alice in “Alice in Wonderland” by the famed Lewis Carroll. The family does seem to be living on the other side of a rabbit hole in this story.

The monochromatic hue of the set staged in pristine white reflects the somber tones and moods the bereavement of the family depicts, a testament to the set director’s eye to detail. The only color is from the child, Dev’s paintings on the fridge, his bed sheet in the crib, and cartoon characters on his chest of drawers; as well as a few stuffed animals. This truly reflected the blandness and emptiness the mourning family emoted, while continuing to hold on to the child’s memories as the only viable color in their bleak lives.

One by one, the characters on stage, through seemingly every day prattle with other family members reveal their pain at this monumental loss, mutely demanding its acceptance and begging for help with moving forward. We see the exuberant, flamboyant aunt, Ishoo, zestfully played by Prathima Vadiraja jabber on and on about a bar fight in which she is the only one who throws the punch at a woman she claims she does not even know. Only, it turns out she is the ex-girlfriend of the guy Ishoo slept with and whose baby she is now carrying. The hilarity of the situation is punctuated with Deepu’s solemn remark to Ishoo, her sister, to not use her grief as an excuse for bad behavior.

Kamala Subramaniam, in a stellar role as Deepu, feels hurt at being ignored by her best friends after the incident leaves her anguished, and vows not to be the first one to pick up the phone to resume connections, and talks about possibly selling the house, having already given the child’s dog away to the grandmother. Dad Avi, played by Harish Sunderam Agastya, who doubles as the play director, deals with his own hell by surreptitiously watching his son’s last few videotaped moments of joy.

The grandmother, Nandini, played classily by Geeta Rai derides the accident prone political family of the Kennedy’s, and chides them for wanting to seek comfort by assigning someone to blame for their many accidental deaths. When this riles up Deepu, her mom suggests joining a support group, just as she herself did after her 26 year old son killed himself.

Deepu scoffs at her mother for drawing parallels between her son’s accidental death and her brother’s cowardice, as well as the insecurity she feels at the God freaks who frequent support groups and draw solace from assigning everything to God’s will, which, in her mind, is all too easy to do. Even Avi is unable to convince her to join his support group.

In a tension charged scene, the raw emotions of the couple surface and Avi’s grief explodes when he realizes his son’s videotape was accidentally erased by Deepu, and he makes it into a blame game with her as the target. He lashes out at her for refusing intimacy with him, for wanting to sell the house, for giving the dog away, for removing Dev’s paintings from the fridge, and for storing his clothes away…in an attempt to erase the child and his memories from their lives.

A suggestion that draws contempt from his wife who scorns that they cannot be there for each other, as each is mourning the same, heartbreaking loss in different ways, in different places.

During the process of boxing up Dev’s stuff to ready the house for sale, some poignant moments between mother and daughter sharing their individual and collective grief unites them and brings comfort. Mom recalls her own time where her comforting friends would take up “consoling her as a hobby.as something to fill up their own time”. A statement, both hilarious and unsentimental in its accuracy and veracity.

Mom counsels her daughter about the nature of grief becoming bearable but never erased. Mom and daughter also share an outing where Deepu loses her cool with a shopper who is denying her child a candy, and slugs her! The line between sane and insane moments definitely blurred because of her pain.

A break from the ongoing family scenes, is the appearance of a refreshing character, Jason. Grayson Richmond excels in his role as a young lad, who dedicates an article he wrote for his school newspaper to the memory of Dev, who he is responsible for accidentally running over with his car. He tries various ways to connect with the victim’s family, only to be shunned and ignored by Avi, but Deepu ultimately invites him over for a meeting. The gawky, unsure teenager, tries to assuage his guilt and get a form of pardon from the grieving family, and ultimately thaws Deepu’s exterior to his chatter about inconsequential events like the high school prom.

Deepu opens up with Jason and breaks down in front of him connecting the arc of their grief from an all consuming emotion, to one that is more bearable and manageable. Avi, too, ends his support group sessions to try to go it alone. In the end, Deepu is ready to reconnect with her friends and the couple agree to take one step at a time in order to reenter normalcy in a world without Dev, while talking about celebrating his upcoming birthday.

The play, with its five characters takes us on an emotional roller coaster, connecting the audience to their personal moments of grief in a public forum while injecting levity and wit through clever and pithy dialogue delivery, coupled with superb acting. It depicts the plethora of experiences we go through, oscillating between the normal and grief crazed moments when we try to hide the pain in plain sight, or, alternately blocking the grief, and giving in to it.

Sometimes, the scenes and emotions seem repetitive, and a tighter editing for a shorter duration would have been beneficial, without compromising the integrity of the story. All the characters sensitively portrayed each role, and Harish, in his ninth directorial venture, deserves accolades for extracting a subtle and refined rendition of this much acclaimed story.

The play is not used to impart any messages, rather to bring a perspective on the very real human condition in the face of unfathomable grief, the resilience of the human spirit, and the ever surging hope that is able to pull us out of abysmal grief.