India West Reviews Naatak’s “Taming of the Shrew” in Hindi

Naatak Stages Hindi Adaptation of Shakespeare’s ‘Taming of the Shrew’ 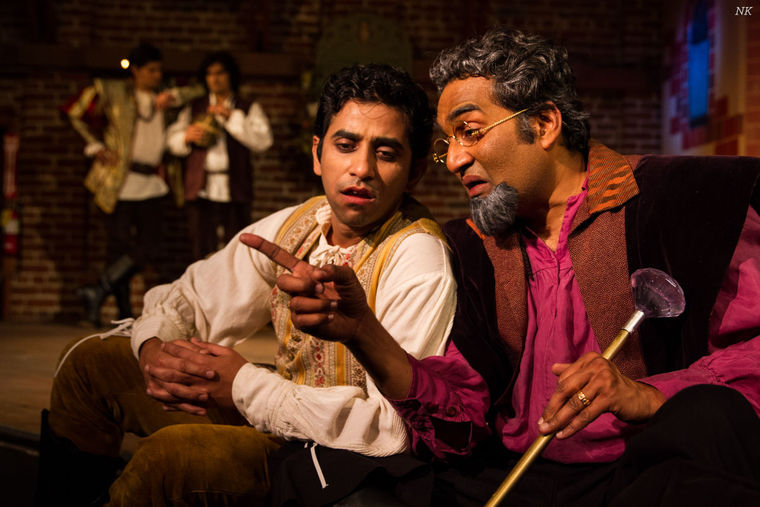 The acclaimed Indian American theatre troupe Naatak is presenting a Hindi version of “The Taming of the Shrew” at the Tabard Theatre Compay in downtown San Jose, Calif., through Mar. 29. (Neha Kumar photo)

San Jose, Calif. — How to make a comedy written in 1590 come alive in 2015? Actually that is not even the full challenge tackled in Naatak’s Indian adaptation of Shakespeare’s “The Taming of the Shrew.”

Produced by Juhi Mohan and directed by Manish Sabu, the show is being presented by Naatak, a leading Indian American theater company, at the Tabard Theatre Company in downtown San Jose through Mar. 29. The cast includes Ratnesh Rai, Gaurav Gupta, Amit Sharma, Vinata Karra and others with music by Aalap Desai.
The main challenge here was how to adapt a Shakespearean comedy to a community at the other end of the world and still retain its beauty, its sharp wit and colorful dialogue.

Naatak rose to the challenge and exceeded all expectations.There are absolutely no other words to describe it but to say “kudos” for such a fabulous job in adapting this Shakespearean comedy to Bundelkhandi.

Don’t balk if you did not even know such a language existed in India. The language is a close cousin of Hindi and appropriately coordinated translation in English appears in supertitles on two closed-circuit monitors on both sides of the stage.

Some of Shakespeare’s plays impart moral messages, whereas some are just to be enjoyed for their sharp wit. Obviously, there is not a moral message that would be applicable in this century, in “The Taming of the Shrew.” In regular English or in Hindi, it would seem preachy. Whereas in Bundelkhandi, this is a beautiful production, with marvelously talented cast, and perfectly suited staging. This play is full of sharp wit, performed in an Indian language that is ancient and earthy, yet easily accessible and enjoyed by all.

(Editor’s note: This is an edited version of contributor Darshana V. Nadkarni’s blog post. Nadkarni is a biotech recruiter and Naatak patron living in the San Francisco Bay Area. Read her post in its entirety here.)