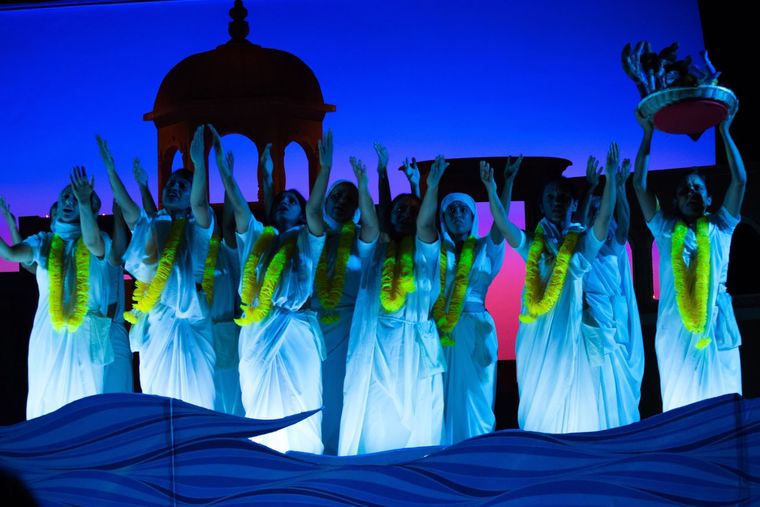 The Indian American theater company Naatak’s 50th production, “Vrindavan”, centers around 12 widows who must deal with a Bollywood actress-turned-politician’s plan to send them back to their homes. (Shweta Prakash photo)

Cleverly written with several allusions to modern and ancient India, the Hindi play kept the sold-out crowd at the Cubberly Theater in Palo Alto, Calif., Sept. 13 thoroughly entertained with its enchanting sets, choreography and music.

The witty and informative musical was at times funny and at other times serious and emotional, but the overall tone remained light throughout.

For instance, the presence of a Bollywood actress required a parody of a Bollywood dance number, which delivered effortless laughs among the audience members.

At the same time, in between the joking and merriment, Saraf reveals the official and unofficial reasons behind the widows’ presence in Vrindavan.

The play does not attempt to glamorize or demonize either the widows of Vrindavan or their lifestyles, but instead takes an honest look at it, acknowledging both its positive and negative attributes.

Though it was in Hindi, the English supertitles made it so audience members of any background could enjoy it, though they may not understand all the nuances of the plot, which centers around 12 particularly spirited widows.

Most of the widows of Vrindavan are brought there by relatives who do not want them after their husbands die, but they all stay because of their devotion to Krishna.

In preparation for crossing the river Yamuna as Vasudev did, the widows learn that a famous Bollywood actress will be visiting.

In the play Malini’s name is changed to Bina Kumari, who visits the widows of Vrindavan after becoming a politician to inform them that she will be relocating the “surplus” widows back to where they came from.

Not wanting to leave the ashram, which has become their home, the widows begin thinking of various ways to keep from being pushed around yet again.

The mostly female cast did a remarkable job conveying both the lighter and more intense emotions as well as jokes and more thought-provoking lines.

The set was also dynamic, with the widows first entering through the same doors as the audience and disappearing behind various elements of the stage throughout the play.

The dances and music of “Vrindavan” provided another unique expression of the plot, with the movements and lyrics coinciding with the message of the preceding scene.

In the end, the play, produced entirely by volunteers of Naatak, the recipient of a Knight Foundation Grant, is tied together beautifully and returns to the beginning.

It is ultimately a play about the idea of home and standing up for what you believe in, with a bit of politics, feminism and religion mixed in.

“Vrindavan” pushes the boundaries of the Indian theatrical art form, offering an Indian equivalent of a highbrow Western opera experience, and is definitely worth a watch.

With most shows already sold out and only four dates remaining for purchase, get your tickets early. Visit www.naatak.org for more information.